Stepping Away from Coach.me 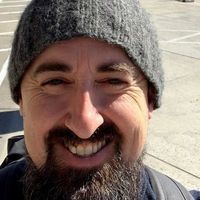 Starting today, Coach Kendra Kinnison is taking over as CEO of Coach.me. I will stay on the board but am stepping away from day-to-day operations.

Kendra is one of our first coaches, our most successful coach, the author and instructor of our habit coach certification, and one of the highest integrity people I’ve ever worked with. I am delighted that she has agreed to take Coach.me forward. Here is her letter to the community.

I need to start by saying how grateful I am to all of the people who have joined me along the way.

We had great investors who helped us get this idea off the ground. Then my co-founder, Jon, was instrumental in getting us established. Then there was an early team of employees and contractors who brought the vision to life.

Then, when we added in coaching, the community of coaches contributed many of the best ideas and knowhow. That’s evidenced today with Kendra taking over.

A lot of the early people have moved on and I’m joining them. I think everyone who contributed in the past knows how many lives they touched. We’ve helped millions of people achieve their goals. That’s a bigger impact than I ever expected to make with my life and it couldn’t have been done without a great team for these many years. Now with Kendra, our ideas will live on.

I’m not ready to say what I’m moving toward next, but I do want to reminisce a bit about this company.

On February 27th of 2010, I entered the first check-in, “ten or more todos in the last hour.” That was the genesis of positive reinforcement as a shaping function for my own behavior.

That turned into a tiny project called Mibbles, which turned into a funded startup called Lift, which morphed into a profitable small business called Coach.me.

It’s hard to claim that we are the inventors of habit tracking for mobile phones given that we had so much inspiration. But we were the first credible app and definitely created the blueprint. Now there are 50+ habit tracking apps in the Apple Store. I think our coaching does the most to help your habits stick, but all these others are solid as standalone apps.

I saw one other habit tracker recently claim that they invented the “big check-in button,” and I just laughed. My dude, we invented that in 2012 to give the act of checking in a sense of gravitas.

Also, we stole the check-in concept from FourSquare and applied it to habits.

We also set the blueprint for swipe to check-in. We “swiped” that from todo list apps.

We set the blueprint for streaks as a primary motivator a la the don’t break the chain concept.

The last major idea, also swiped, was that people in the same habit were an ad-hoc community that could support each other. That we swiped from an early goal setting app called 43Things.

We also invented coaching over text messaging. I feel more confident in taking credit for this.

Other people had tried “e-coaching,” but they hadn’t cracked the code. We figured it out, with the help of our early coaches. So now, the fundamentals of how to relate and connect to clients over text messaging are well known. That opens up a huge world of new coaching possibilities and, most importantly, makes coaching accessible to many more people.

Most people can’t afford $250 coaching sessions. Many more people can afford a month of habit coaching for $87.

One early moment stands out.

I spoke at a conference, and afterward, someone in the audience pulled me aside. With intense earnestness, they told me that our app had saved their life. They were struggling to stay sober, and it was the habits they tracked in Lift that kept them from falling backward. It’s the earnestness that stuck with me, and I still keep the AA chip they gave me on my desk.

It was the first time that I had come face to face with what it means to change another person’s life. Of course, I expected to change people’s lives, but it was all a little abstract because when you build software, you often don’t meet very many of your users.

I hope always to be doing life-changing work. I don’t think that will change.

After that earnest interaction, I ran back to the office to tell the team, “Hey, our work really matters.”

Startups have this life-or-death anxiety to them. If you don’t find a big business, then you run out of money and die. But we managed that anxiety by knowing that no matter whether we succeeded as a business, we were succeeding in changing people’s lives.

We’ve had millions of people use our services. We’ve coached 10s of thousands of people. We have turned hundreds of people into coaches.

These habits turn into deep changes in the world.

One of the members of my old coaching group sends me an email every six months to update me on how a small habit change with prioritizing has led to preventing thousands of cases of human trafficking. He re-prioritized his life, not for income but for both impact at work and time for health and family. He still works less, but achieves more. And this is the more — stopping people from being trafficked, often from being tortured, sometimes from being killed. As he points out, changing someone’s life for the better has multipliers: we changed his, he changed other people’s, those people are not lost to their families.

That amount of good is really staggering. I am very proud of this company and the team that built it.

The new thing that I’m seeing clearly for the first time is how much the experience of launching and running this company changed me. It has been such a privilege to work in this industry and marinate in the ideas of so many forward looking people. If any of you reading have a chance to do life changing work for other people, do it. That work will also change your own life.

This company put me in contact with so many aspects of self-improvement. I’ve gone through habit change, ingrained a million behavior change strategies, built up a mindfulness skillset, been coached by 8 different coaches, gone to therapy.

It adds up, not overnight, but it adds up.

I’ve been thinking back to when I started this company and how little trust I had in myself. I knew that when inspiration struck that I could be wildly productive. But what about when inspiration didn’t strike?

This lens of trust is maybe the best way to summarize my experience of diving into the self-improvement deep end.

The drama of self-loathing, negotiating and pleading with myself, hoping and worrying is vastly reduced. Instead, life is nearly boring: I decide what to do and go do it. I trust that I will do the work. I trust that I will learn and adjust along the way. I trust that my emotions will stay even no matter what stressful situation I’m in.

Actually, a more subtle way to say emotionally even is that I trust myself to have emotions. They come, I accept them, they go.

I will restart my newsletter in a few days. That’s not the new thing, but it is affected by the new thing. Sorry to be coy.

I bring up the newsletter because it was such a great example of trust. I wrote 268 daily issues, never missing a day. I didn’t know how to write a newsletter when I started, but I trusted myself to find out. I was consistent. I got better. I didn’t let doubt or anxiety control me. I always found curiosity about mistakes and gratitude for the readers and the lessons I was learning.

That’s a good head and heart space to be in. If there’s anything that I’m selling to you here in my goodbye, it’s the idea that self-improvement is a good way of life. There are lots of small wins along the way. But if you keep up with it for a decade, then you might earn the massive victory of being comfortable being yourself. It’s emotional to write that — I’m so grateful that the new me is just the old me but without so much getting in my own way.

With love and gratitude. I appreciate all of you.

P.S. Just for nostalgia’s sake. Here were the elevator doors and “achieve anything” motto that we used pre-launch. 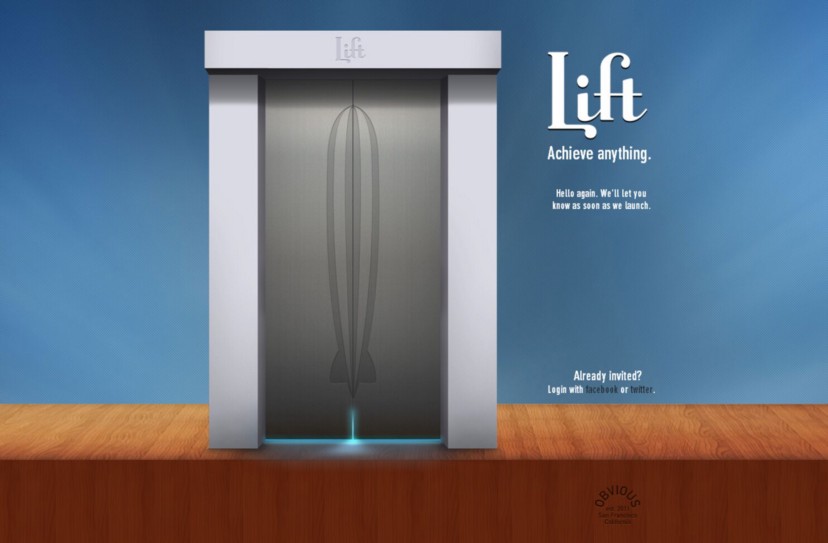 And for more nostalgia, here were some of the many designs we considered for the habit tracker. 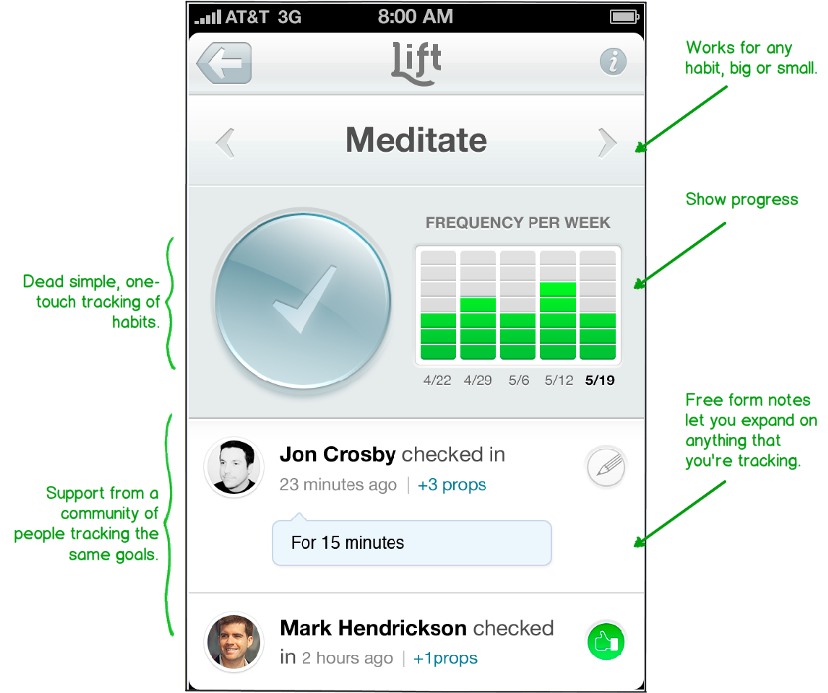 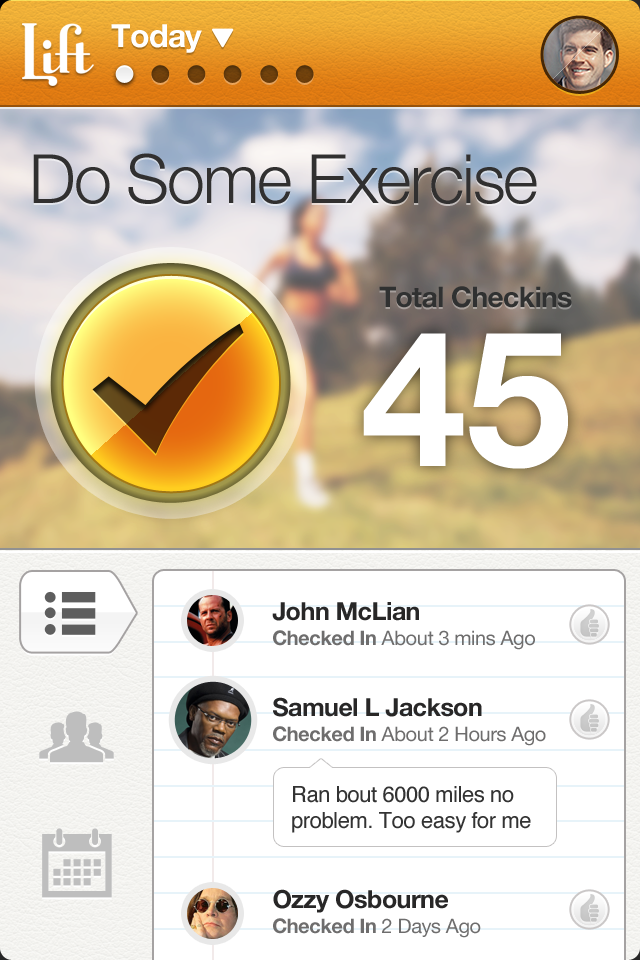 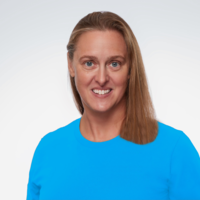 There are moments when seemingly disparate areas of life converge, and everything makes sense. Recently, I experienced that when Tony shared the opportunity to lead Coach.me.

I discovered the “app” almost exactly a decade ago. I had accidentally noticed the power of habits and was thrilled to find helpful tools and other folks that shared my enthusiasm. Since then, I’ve connected with thousands of clients, coaches, and fellow habit aficionados from all over the world. Those relationships and conversations have enriched my life tremendously.

I believe that habits are one of the human superpowers, and science gives us clues on how to use them. I believe that coaching is uniquely helpful for providing the starting point, pathway, and support for crafting our habits intentionally. Combined, we can help people gain the momentum they need to overcome challenges and achieve their goals. Through this platform, we have made those services accessible and affordable through coaches with diverse perspectives and insights.

I’m extraordinarily grateful for Tony and the entire coach.me Team that brought us together and made this possible. Long ago, Tony and I realized that we were both motivated by the quote from Leila Janah that “Talent is equally distributed, but opportunity is not.” I’ve seen firsthand how our platform enables accessibility and support, and I want to keep working towards that mission.

To the Coach.me Community:

I’m delighted to have the opportunity to serve and nurture this community. My first focus will be on providing the resources that coaches need to impact their clients in a positive way and build thriving businesses.

Many of those initiatives are already in place:

I also have a “wishlist” that’s been capturing ideas and possibilities for years. There are features that would be helpful in supporting evolving coaching practices. We can find ways to collectively share our stories and highlight the power of habit coaching. We can offer more training on both the craft of coaching and effective business practices. We can update our directory to reflect emerging areas of interest that would benefit from coaching support.

Next, I want to hear about your wishes too. I want to understand the features that would be most helpful to you. I want to compile the stories of each of your coaching journeys. I want your feedback on the training topics that are needed most.