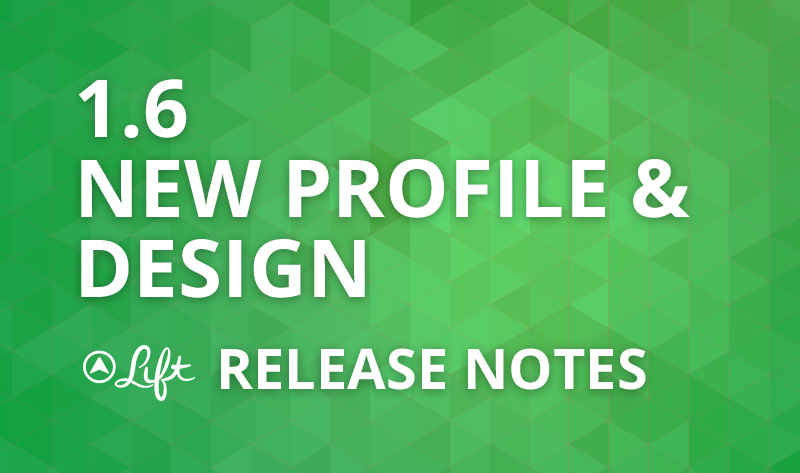 We’ve added a new version of your profile that’s faster and has clearer summaries of your progress. We’ve also redesigned our primary navigation.

Read on for our thinking on this release.

This is by far the biggest design change we’ve ever introduced. Most of the changes are around navigation. Nothing was removed, but a few features are in new locations (try the cog on the Me tab).

I’ve often observed that significant design changes are rough patches in the relationship between designers and app communities.

For us, the designers of Lift, these changes are a moment of clarity, which free us to move faster and with more confidence. We’re excited. For you, the user, there may be a short blow to your sense that you’ve mastered the Lift app. I hope that you’ll take a minute to rewire your brain with new habits for how you to get around on Lift.

The Habits tab is where you go to check-in and it contains our full behavior change loop: motivation, ability, trigger. The Activity tab is home to community. The Me tab is home to your history.

There’s a much longer story here about how to do iterative product development (an ongoing topic in these release notes).

As I’ve played with this version, I’ve found myself going back to my profile over and over again. I think the reason is because it’s faster. That’s an example of an early iteration growing up and getting a lot better in the process.

There’s also the issue of breaking big changes into releasable chunks. That’s the key to our iterative, continuous deployment strategy. The changes you’re seeing today are the first part of a much bigger design. I think we’ve given you a coherent, valuable, discrete chunk of that design in this release.

There’s much more work to do. So let’s all go heads down on making better versions of ourselves.