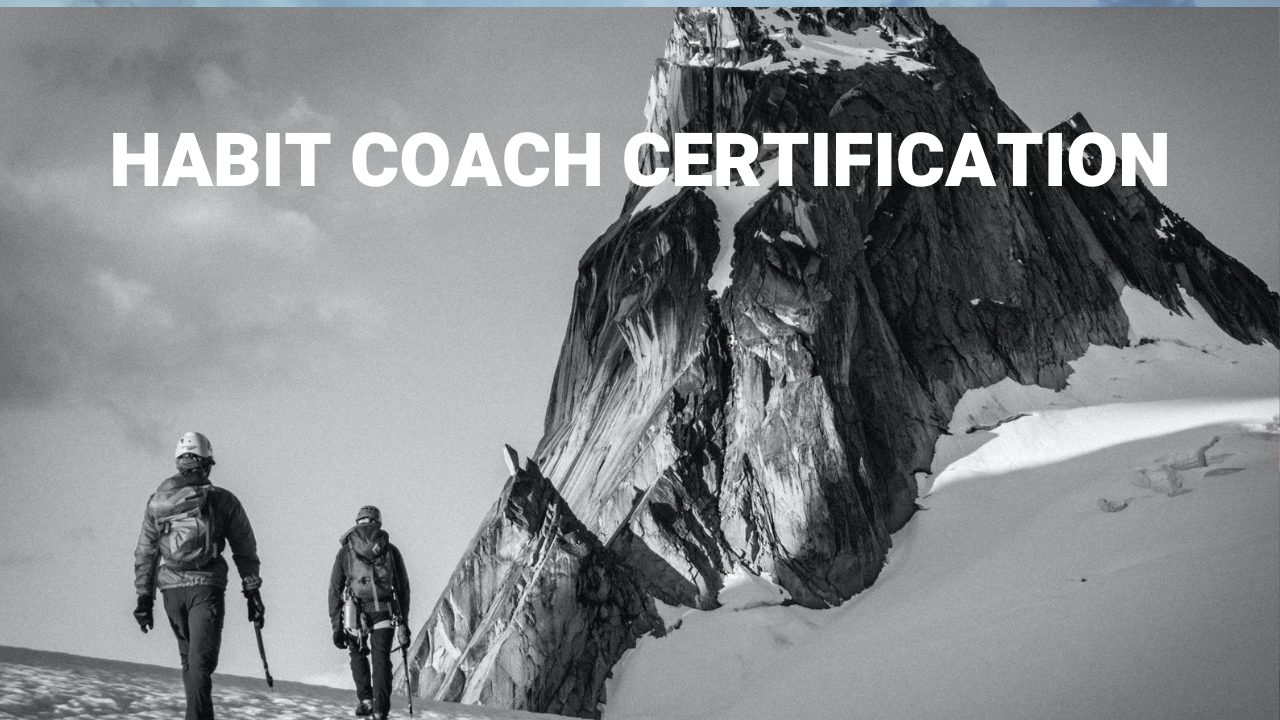 How you can wield the life changing power of habit.

We’ve redone our Habit Coach Certification and we would love for you to join our next cohort of coaches starting August 1st.

There’s a lot in this certification that will feel brand new, no matter how many books on habits you’ve read. I’m going to write about some of the highlights below just because I hate writing pure sales copy. You should be able to read this post and come away feeling smarter whether you end up going through the certification or not.

The first important change in our training is that we switched from self-study to a cohort and instructor led model. You train for 8 weeks with fellow coaches and are led by an instructor who has used these materials to coach more than a thousand clients.

The second is that we’ve taken five years of experience, testing and research and have a lot of new things to say about the science of habit change. That’s the meat of what’s below.

When we launched Habit Coaching in 2015, it had never been done before.

Certainly, people were talking about habits. But nobody had realized you could turn traditional coaching inside out. Instead of starting big, you could start small and still end up with the same types of successes.

That’s the power of habit. When you master habits you realize that they add up. And as you tackle each new habit you end up facing obstacles, emotional hangups, blind spots, conflicting missions. If you force yourself to keep taking a step each day, you force yourself to face and then overcome each of those challenges.

If you are already a coach, you will add a new super power, giving yourself the ability to coach for progress in between your existing coaching sessions.

If you have never coached before, then you will get a taste of the incredible power of coaching to help a client achieve their goals.

Habit change as a concept is now big enough that it has a dedicated bookshelf at my local bookstore. Power of Habit, Atomic Habits, Tiny Habits, Four Habit Tendencies, Switch. A lot of people have read these habit books and mostly what they learned are sharper ways to form a habit.

Or in Tiny Habits, After I <existing anchor habit>, I will do <new habit>. Especially emphasized in Tiny Habits is the power of starting small so that you are guaranteed the reward of finishing, i.e. “After I brush my teeth, I will floss one tooth.”

These books have a lot of overlap and cover what we call the contextual details of habit building. This is a key concept to understand as a coach or behavior change expert. There is a huge void between generalized habits as you might hear people talk about in conversation and contextually specific habits as you will find yourself designing them.

So a generalized habit like “I don’t eat sweets” is made up of many contextual habits like, “When the waiter asks me what I want for dessert, I will respond that I’d like mint tea.”

This article summarizes the different popular habit system from these books. A lot of clients will already be familiar with them, so you should be too.

The first big new concept is the Keystone Habit. Originally, we’d trained coaches in what we call the Momentum Methodology. The core idea in Momentum is that everyone should focus on consistency first before building toward more ambitious piles of habits. Consistency is what gives you momentum.

We’re doubling down on that idea by giving that first habit a name, the Keystone Habit. What habit creates the consistency that is the foundation of success?

To arrive at this keystone habit, people need to be able to translate from a goal. If you want to make a million dollars, what is the keystone habit?

Most coaches arrive at this translation through experience. Maybe it is as simple as shrinking the goal. To make a million dollars, you first need to be able to make one dollar. Although, from my own experience coaching, I think the keystone habit is probably to set priorities for your day.

Below is a worksheet to help think about this. Probably you will be translating from a defined goal, like “Complete an Ironman Triathlon by the end of this year.”

But occasionally you’ll have to work from a person’s mission, “I want to live a life of meaning” down into what goals would achieve that and then eventually into the first daily action that will put them on the path to success. That last is the keystone habit.

In the top half of the model, the key thing to know is that once you are successfully executing on a keystone habit, you will want to be adding new habits that are often more complicated, more challenging, and more specific to the bigger goal.

This is the radical belief behind habit coaching, which is that success comes from a massive collection of habits. It’s radical because people so often hope that they can achieve big goals with just one quick fix.

I think of the concept of massive habit collections as coming from the book Talent is Overrated, which goes through several historical prodigies and demonstrates how practice and habit were the dominant explanations for their success.

The truth, which everyone knows deep down, is that success requires work. Habit coaching starts a path to achieve any goal, first by focusing on consistency and then later adding harder and harder habits on top.

What we found in coaching habits is that success is not nearly as simple as merely creating a sharply defined habit. This is something that we don’t think the habit books have highlighted nearly enough. There are many types of obstacles.

That’s where our Open Gates Model comes in. In order to succeed, each of these following Gates needs to be open.

You can’t effectively practice basketball without a ball and a hoop. Things in the environment category include tools, external triggers like alarms, available time, and supportive family and friends.

You don’t lose weight by changing one meal on a single day. A lot of goals require a consistent behavior change over weeks, months, or years. This category is about building that required consistency.

Skill and strategy are usually the key elements of capacity.

For example, to improve at chess, learn strategies for openers. But you should consider mental or physical issues here as well. If you are suffering from anxiety, then all your other work is going to suffer as well.

These are things you believe about how the world works or how other people work. When you are wrong, you’ll get stuck.

The problem is that we all have many beliefs that we haven’t ever articulated. So, we might not even know when a belief is getting in the way.

These are beliefs you have about yourself. If you believe you are a great improviser, you may find yourself resisting making a plan.

If you are proud to survive on limited sleep, then you’ll avoid better-sleep habits no matter how much science says that this will improve your productivity.

These are the things that are important to you, your life goals, your purpose.

A lot of people quit making progress, simply because they find the work required isn’t justified when compared to their other goals in life, i.e. they have better things to do.

Sometimes opening one of these Gates is easy. Sometimes it’s hard. Belief, Identity & Mission are especially hard, which is why coaches have so many tools in their coaching toolbox.

We’ll at least teach you how to look for a closed Gate and then with practice you’ll develop strategies for opening them.

Ok, back to the Habit Coach Certification announcement. This is for experienced coaches and also for new coaches. If you’ve coached before you’ll learn something you can add into your coaching practice.

If you’ve never coached before, you’ll find yourself coaching people for the first time before the training is over.

You will need to be a Coach.me member (just $5/month) and then the certification is an extra cost. You can sign up here.

The program lasts eight weeks and is built around a weekly lesson, a weekly exercise that you do in order to become certified and a weekly set of office hours where you can get your questions answered.

Just as important, you go through the lessons with a cohort of other coaches. That turns out to be one of the biggest factor in the success of our coaches — cohorts create extra ways to understand the lessons.

At the end of the 8 weeks you will have learned a lot more than I covered above, you’ll have coached several clients, and you will be Habit Coach Certified. So you can put HCC after your name, as in Tony Stubblebine, HCC.