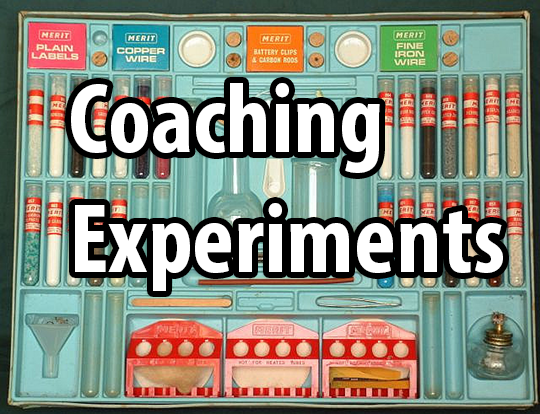 Warning: I write a lot. This is a history of the concept of coaching in Lift. The only reason to read this is if you’re super curious about the internal workings of Lift, you’re a product/startup nerd, or you want to play a role in the future direction of Lift. There’s a surprising number of people like this in the Lift community (thank you!) and I love to hear from them. But, by no means, am I expecting everyone to read this.
Distribution of CoachingI have a board meeting today. Board meetings are when our two biggest investors get to grill me over what we’re doing and why. So, before each board meeting I go back and review what we’ve talked about in the past. Looking at those notes, I see that I often talk about our mission as being about distribution of coaching.In the nature vs. nurture debate, excellence is mostly nurture (contrary to popular belief). If we could all have access to the right nurturing, then we could all be excellent. That’s what I mean by this being a distribution problem. We know that someone else is getting great coaching, why can’t we get that same level of support?In my first conception of Lift, the coaching I had in mind was robotic. The Lift app would be your best friend, doling out points and awards.But people are a lot better at motivating each other than robots are. So we redesigned Lift to be social (this all happened in relative anonymity pre-launch).

Accountability CoachingAfter we launched, a number of people on the Lift team started championing the idea of accountability coaching. Erin was the biggest champion and even went as far as taking on a dozen clients for a few weeks.I knew from Erin’s experiment that accountability coaching, which started out as her checking in with you each day to say “good job” or “do better tomorrow” had a statistical impact. Erin’s people were 40% more effective at their goals.That led to a lot more experimentation and then eventually to bringing real coaches on to Lift. We’ve probably run dozens of experiments covering price points from $5 to $50 and covering a number of different styles of coaching.Eventually, we settled on a form of accountability coaching as the most appropriate for online coaching. Traditional in-person coaching works through $100+ in-person sessions, usually weekly. That style of coaching has technically already moved online, with many coaches doing their coaching over Skype.

Online vs. OfflineBut when we talk about online coaching, we’re talking about coaching that’s native to our new technology tools, namely mobile.Offline coaching is great at diagnosis and assessment–spend an hour with a coach and they’re going to learn a lot about you. Online coaching, especially via chat and at lower price is terrible at this. Online coaches basically have to trust that the goal that you have in mind was well considered.However, online coaching is great at one thing: prompting action. We’ve been giving our coaches training around momentum methods (related to BJ Fogg’s concept of Tiny Habits). If coaches can help you build momentum, then they will have created a lot of surface area for future coaching. Without momentum, it’s exceedingly hard to pick out what’s blocking you.In our accountability coaching, the only up front assessment our coaches do is whether your goal is too ambitious to reasonably complete on day one. That’s part of our concept of momentum. Any progress is good progress, but it’s very common that the thing blocking you is simply that you’re biting off too much.For example, one of my clients came to me saying he was procrastinating on his dissertation and wanted to be held accountable to eight hours of writing each day. My response was to challenge him to to go from sitting at his desk to writing his first sentence in under five minutes. That’s a momentum technique–that dream of eight hours of writing doesn’t mean anything unless you can take the first action.

The Good and the BadWith these early experiments we’ve had statistical success. In our first rollout of accountability coaches, Tim Ferriss challenged 5,000 people to abstain from alcohol for a month. People that hired an accountability coach for this challenge were four times more likely to complete the challenge.I keep saying statistical success because I’m also aware of all of the hiccups. The data says that you’ll be a lot more successful with a coach. But we also read all of our feedback (and liberally give out refunds for every mistake). By far the biggest complaint early on was from people who wanted to hear from their coaches more often.This turns out to be sort of a coaching challenge. What should a coach say to a person that’s on an eleven day streak? There are only so many ways to say good job. What should a coach say to a person who went radio silent and didn’t tell their coach why? Is prodding helpful or is the person on vacation? Without a doubt, the people who are getting the most out of online coaching are the chattiest. Our coaches want to help and the more they hear from you the more feedback they can give. Quiet people are hard to coach, but, we’re getting a lot better at that.

Accountability Coaching for XOur accountability coaching experiments have been getting more specialized: weight loss, writing, meditation. That specialization gives the coach an opportunity to develop a set of tips and goal-specific exercises that they can give to you. Cecily is a great example of this. If you’re not sure what to write, she has a new writing prompt every day.One other thing that we’ve noted, and aren’t totally sure what to do with, is that some of our best coaches have been amateurs. In the Tim Ferriss abstinence from alcohol challenge, we provided one professional coach and one mentor, whose main qualification was that he was already on a 100 day streak of sobriety.That idea of turning success stories into peer leaders comes from Weight Watchers. All of their meeting leaders are recruited from people who have lost weight in the program. At first, I thought training a Lift success story to be a coach was a radical, and scary, idea. I was prepared to refund everyone who chose him. But he turned out to be the more popular coach and to have a lot of success. His “I’ve been there and here’s how I got past it” wisdom was really powerful.Cecily also is an example of an amateur coach. Although she writes professionally, it’s not like she’s been to coaching school. But I’ve found her to be one of the best coaches we’ve worked with. I think this is the other big switch with online coaching. Coaches can be judged on their track record rather than their certifications. (Also, since online coaching is a different beast that doesn’t have any certification programs, certifications end up being a moot point).

So, why did I tell you all of this? Like everything we do, these coaching experiments are coming with a lot of thought. But they’re also experiments and they’re going to get better through practice and refinement. We’re trying to make them risk free to try via coupons. If you do try, please give us your thoughts. My email is tony@lift.do and I will see replies to this newsletter. In Service,TonyCEO/Founder at Lift