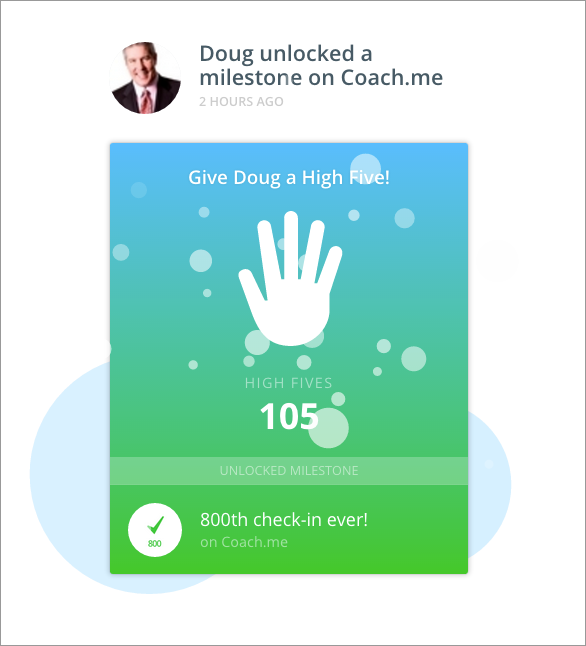 This release adds celebrations when you reach streak or progress milestones in any of your goals. We’re calling the feature milestones.

We also fixed a bug that was causing crashes for some users.

For a long time, basically the entire life of this company, I’ve been interested in positive reinforcement.

Of course, for people, this story gets more complicated. We tend to overanalyze. Some of us even manage to convert a reinforcement into a non-event, i.e. we’re the people who can’t take a complement.

So, one of the things we learned early on was that the reinforcement needed to mean something.

Today’s milestone release revisits reinforcements that are generated by our app. The first version of this app (only seen by my close friends) would give out points. Invariably, people would ask, “Why did I just get 50 points?”

So, I had to admit that points were meaningless. When we went back to the drawing board for milestones, we looked at the path of our most successful users. They all got addicted to making consistent progress.

The milestones feature is about calling out steps along that path. We’ve chosen important markers that show that you’re making progress.

Your first check-in is the most important. A three day streak is a great start. Your 50th check-in means you’re beating 95% of the world. (And, it should be noted that two of our users passed 1000 day streaks and didn’t hear anything from us.)

So, if you do get the milestone celebration from us, I hope you’ll agree that we’ve chosen an important marker of your progress and that you’ll envision the reinforcement doing physically reinforcing the neurons that are responsible for your goal.

Also, if this version of the app doesn’t crash on you, please add or update your reviews in the app store. They get wiped out with each new release, so we rely on you to re-add them. It’s just a few taps if you’re on your iPhone.